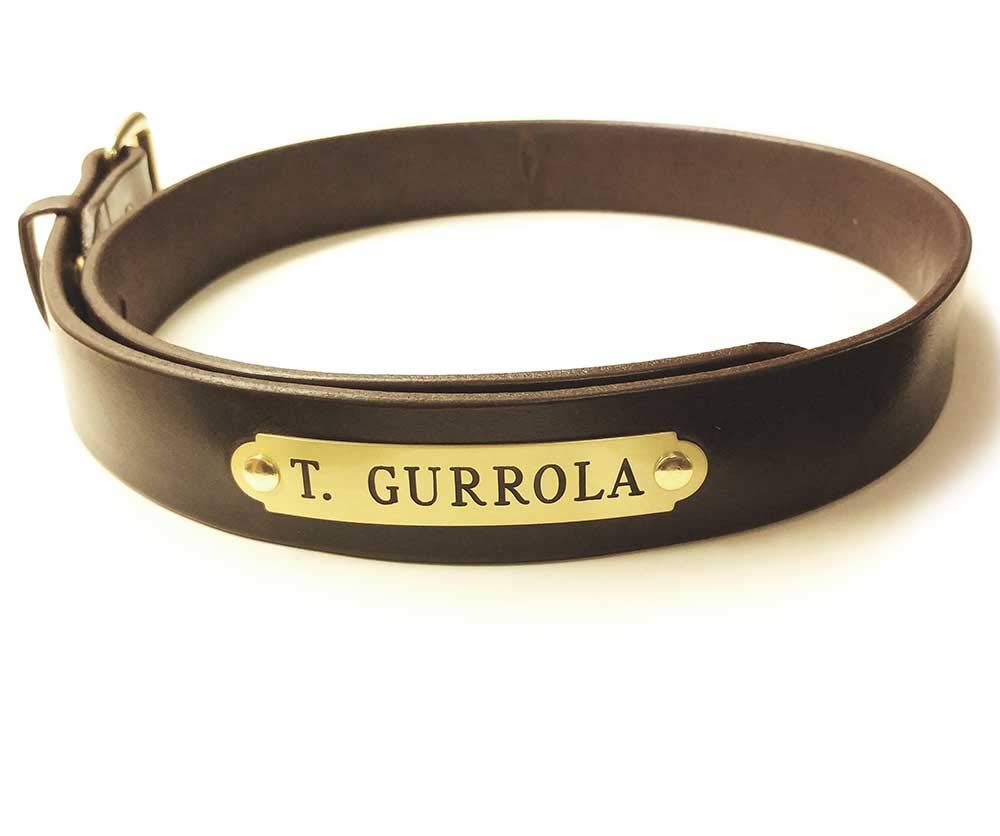 Our Leather Equestrian Rider's Belt without or with up to three Custom Engraved Solid Brass Name Plates, features a premium quality 1 1/4", 12 oz, 5 hole leather strap in a medium or dark brown color with a heavy duty, solid brass, roller buckle and a leather keeper. Black is also offered with a stainless buckle and nickel silver plate for $5.00 extra. The belt is hand made locally by our wonderful Southern Maryland Mennonite craftsmen using meticulously chosen hides and old world craftsmanship. We custom engrave your notched style 3 1/2" solid brass plate(s) with one line, your choice of font, and mounted with solid brass double-cap rivets with a nice curve to accommodate a comfortable fit. (PLEASE check your Amazon messages after ordering in case we have any issues or questions about your order. Failure to do so may result in order cancellation due to Amazon shipping deadlines.) So PLEASE stay in touch :) Please use our SIZING DIAGRAM in the photos to order your belt. **********IMPORTANT! Since these are custom cut to your specifications, you MUST cancel within 24 hours or it is considered sold. Remember, they are NOT resizable once shipped, and after 24 hours, the order cannot be changed. ************* IMPORTANT INFO ON SIZING: PLEASE follow the guidelines in the listing, and ABSOLUTELY use the DIAGRAM in OUR listing. DO NOT use past purchases or verbal information for your sizing - YOU WILL VERY LIKELY BE TOO SMALL. Follow our instructions EXACTLY and you will not be disappointed. REMEMBER, these are CUSTOM MADE for YOU so they CANNOT BE RETURNED. Further, exchanging for a different size, even when possible, is COSTLY - usually about $35, so it pays to take your time and BE SURE you are measuring for the way OUR belts are cut. If still unsure, please contact us for help. ************Also, please see our other listings at our Amazon storefront at https://www.amazon.com/handmade/Endless-Etc-Engraving.